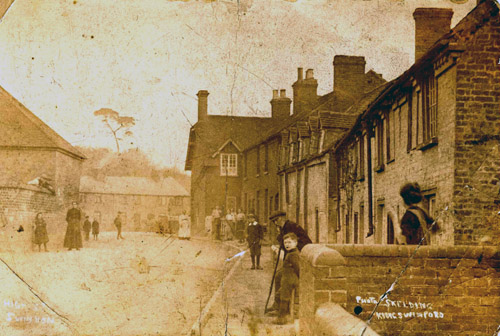 The family of Isaac and Sarah Williams (nee Baldwin) moved to Swindon, Staffordshire between 1869 and 1871, moving from Lower Mitton (Stourport) in Worcestershire to Wolverhampton between 1861 and 1863 and then to Swindon, a small village in Staffordshire, near to Dudley.

It is assumed that they moved for reasons of work. Isaac was an iron worker and the company that he is believed to have worked for, E. P. & W. Baldwin, had works in Wilden, Worcestershire as well as in Wolverhampton and also Swindon, Staffordshire. Isaac and Sarah then stayed in Swindon , where Isaac died in 1891. By 1901, Sarah had returned to Worcestershire but she remarried later that year and moved back to Swindon, where she died in 1914. A number of her children remained in Swindon and some of their descendants still live in the village today.

The name of the village is thought to derive from Swine-Don (Pig Hill) – it was a pig-rearing area within Kinver Forest where animals were driven from Kings-Swin-Ford to the banks of the River Smestow. Its natural assets – timber from the forest, water from the Smestow brook and coal from the nearby Black Country pits – all helped the iron works to develop into a modern rolling mills. The close proximity of the Staffordshire and Worcestershire canal, running alongside the works, enabled the transportation of coal and steel bars, as well as the finished products for export.

The history of Swindon is dominated by the iron works, which gave rise to the development of the village in the first place. Iron production in the village lasted some 400 years, from the operation of a blade mill in the 15th century until the iron works was closed in 1976.

The village was small – its population in 1891 was recorded as 476 (the estimated population in 2004 was only 1,361). Most villagers worked either on farms or in the iron works, which can be seen clearly on the 1904 six-inch map of Swindon. There was no electricity in the village until the mid-1920s and the iron works made its own power, a large water wheel being used for some years to power a large drop hammer. Steam power was provided from four very large boilers (a fifth was added later, utilising heat from the mill furnaces where the bars were heated for rolling into steel sheets).

The village itself consisted mostly of small, terraced houses with shared toilets and wash houses at the top of a garden or yard. Each household would have set times when the washing could be done. Wells were the main source of water; until about 1902-1904 there was no piped water and even then it was to stand pipes serving several houses. When electricity came in the 1920s, tenants had to pay for the installation. Cooking was done on coal-fired grates or paraffin stoves and lighting was by oil lamps or candles.

Most children were born at home with the district nurse in attendance – she would only call the doctor if she thought she couldn’t manage. The nurse had to come by bicycle – some three miles from Kingswinford or Wombourne.

There were quite a number of farm workers who lived in the village and houses near the farms. These were often tied houses which went with the job. If you lost your job, you lost your house and, unless you had a good boss, you were constantly on the move. Most of the farms, houses and land were owned by the Earl of Dudley at Himley Hall and those who farmed them were tenants.

The school was Church of England and was well attended with a maximum of about 150 pupils between the ages of 5 and 14. Exams were held for certain Grammar Schools but very few children attended them as parents couldn’t afford the expense if the children passed. There were evening classes locally at which you could take courses.

The social life of the village consisted of occasional whist drives, dance concerts, football and cricket. There were three pubs – The Old Bush, The Greyhound and The Green Man, the latter being owned by the iron works. St John’s Church was consecrated in 1854 as a chapel of ease to Wombourne and the church played a large role in people’s lives.

The works became part of the British Steel Corporation and was finally closed in 1976. The buildings were all subsequently demolished, except for the works canteen which was opened as a community centre in 1981. The village is much changed in appearance today and new housing has been built on the site of the steelworks.