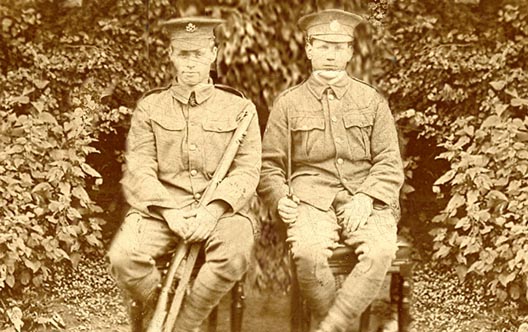 “KILLED IN ACTION
Sergt. Isaac Leonard Williams, South Staffs, whose mother resides at High Street, Swindon, Dudley, has been killed in action. Sergeant Williams, who joined the Army four years ago, had been on active service for two years. He was 22 years old and received his first wound in June 1915. He fought through many battles. ”
Wolverhampton Express & Star, 17th August 1916

Len, as he was known, enlisted as a regular soldier in the South Staffordshire Regiment on 13th May 1912, aged 18 years and 8 months. He was born in Walsall Street, Wolverhampton on 21st September 1893,  his parents having moved there from Wombourne sometime between 1891 and 1893. Between 1901 and 1903, the family moved back to South Staffordshire (Swindon, near Dudley), where family members still remain today.

According to records held at the Regimental Museum, when Len enlisted in 1912, he was five feet six and seven-eights inches tall, weighed 122 pounds, had a fresh complexion, grey eyes and sandy hair. His occupation before joining the army was given as a farm labourer.

He joined his regiment at Lichfield on 29th August 1912.

It seems that Len’s service record was one of those destroyed by bombing in the Second World War so the only information about his service comes from his medal card and the Battalion War Diary. Nothing is known about his army service until 4th August 1914 when the battalion was mobilised at Aldershot. They left Aldershot by early morning trains at 03:15 and 04:27 on 11th August, arriving in Southampton where they spent the rest of the day, before setting sail at approximately 13:30 on 12th August aboard the S.S. Irrawady.

They arrived at Le Havre the following morning, disembarking at 07:30 hours and marching to “No. 1 Camp”.

The Battalion War Diary gives a detailed account of the battalion’s movements from 1914 until the end of the hostilities. As other ranks are hardly ever referred to by name, it’s not known exactly when Len was with them. A family member remembers Len coming home on leave and, shortly after his return to the front, news coming of his death.

He died on 29th July 1916 in Delville Wood, France, serving with ‘A’ Company, 2nd Battalion, South Staffordshire Regiment. He is buried in Gordon Dump Cemetery, Ovillers-la-Boiselle and is commemorated on the Remembrance window at St John’s church, Swindon, Staffordshire. Len was posthumously awarded the Military Medal in the London Gazette of 19th February 1917. Although it’s not known for certain why he was awarded the Military Medal, I have previously written about a likely event found in the Battalion War Diary.

Extract from the War Diary of 2nd Bn, South Staffordshire Regiment
by Lieut-Col. R. W. Morgan,  commanding 2/South Staffords
(transcribed here with permission from The National Archives (ref.: WO 95/1362). The diary is now available to download (£))

The Battalion moved up into Delville Wood on 27 July 1916 with the 17th Middlesex Regiment in support of the 99th Infantry Brigade, relieving the 23rd Royal Fusiliers who were holding the western half of the wood.

The 99th Brigade was withdrawn and the 2nd South Staffs was disposed as follows: ‘A’ Company was in the front line near the Northern edge of the wood, ‘B’ Company was in support, ‘C’ Company forming a defensive flank facing West and ‘D’ Company was in Battalion Reserve. The whole wood was kept under incessant hostile shell fire and our losses were somewhat heavy.

About 9pm, the Germans attempted a counterattack accompanied by very heavy shelling of the support line and the Southern edge of the wood. Bombing patrols approached the lines but were easily beaten back and the whole of the original positions held. Arrangements were made to counter-attack in case the enemy penetrated the wood.

“During the bombardment, part of the line held by ‘B’ Company was practically obliterted by heavy shells. All the officers were killed and most of the men buried. In spite of this they stuck to their position…The Battalion held on under greatdifficulties in the matter of supplies and water which had to be taken up to the Companies through a very heavy barrage…”

The Commanding Officer drew up a scheme for holding Delville Wood with 1 Battalion and machine guns supported by another Battalion some little distance in the rear.

In the evening, the Battalion and the 17th Middlesex Regiment were relieved by the 13th Essex Regiment who took over the line with the 1st King’s Regiment in support. The relief was completed by about 10.30 pm and the Battalion went back to the position previously occupied in the old German Support Line, just North of Carnoy. The South edge of the wood was again heavily barraged just as ‘A’ Company withdrew and the route back was also shelled. “The Delville Wood position formed a very advanced salient in the British front and was then exposed to hostile shell fire from 3 directions. It may safely [be] said that holding such a position is the most supreme test to which any troops can be put. The Battalion held this position for 2 days whilst an attack on a very large scale was being prepared as the Commander-in-Chief considered it essential before any further operations could be undertaken.”

Len was one of the 42 other ranks from the battalion who was killed. He is one of the 1,676 Commonwealth servicemen buried in Gordon Dump Cemetery, Ovillers-la-Boisselle. Of those buried there, 1,053 are unidentified. Fortunately, Len does have a marked grave.