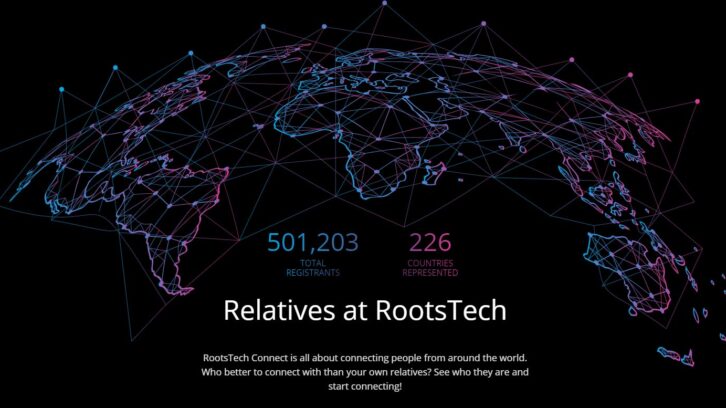 Rootstech 2021 was an online event so, I must admit, I was wondering how the “Relatives at Rootstech” would work. I had experienced this at Rootstech London in 2019 – the first time I had knowingly been in the same room as a 9th cousin!

“Relatives at Rootstech” depends on your adding details of your ancestors to the FamilySearch Family Tree – basically a global family tree that anyone can edit. Details of living individuals are only visible to the person adding the data – it’s only those marked as deceased who are publicly viewable.

I had initially been reluctant to add my ancestors to this tree as I was worried about other people “correcting” my information and making it wrong. I have seen enough errors in Ancestry trees over the years to be wary of other people’s research so the idea of this sort of collaboration filled me with horror to begin with.

However, I was won over at Rootstech London in 2019 when one of the speakers mentioned that the Rootstech app could tell you how many other relatives were also at the conference, based on common ancestors in your family trees. I decided that if my deceased ancestors were likely to be on the tree anyway, then I could at least make sure the information I added was correct. Unfortunately, it took until almost the end of the conference to get my app working properly as I’d deleted – or tried to – some living individuals that somehow resulted in my branch of the tree becoming corrupted. I was very grateful to the technical staff at the FamilySearch booth in the Expo Hall for sorting it out for me – I suspect this would have been more difficult to sort out this year if we’d been trying to do it virtually as I needed three or four of their booth volunteers before the issue was resolved.

Once the “Relatives at Rootstech” feature was working for me in 2019, it was almost the end of the three-day conference and there were only a handful of cousin matches. I reached out to a couple just to say hello but we didn’t manage to meet up in the sea of almost 10,000 attendees from 42 countries. By contrast, Rootstech Connect 2021, being virtual and free of charge, attracted more than one million attendees from over 200 countries.

The day before the virtual conference started, I had 446 cousins attending  from nine countries. By the time Rootstech started, this increased to more than 700 cousins, and by the end of the second day, it was 1,494 relatives from 11 countries. By the end of the final day, it was more than 1544 relatives, the vast majority of whom were are in the USA. My closest relatives were a handful of 5th cousins once removed, meaning that my 4x great-grandparents are their 5x great-grandparents.

As far as I can tell, all of my supposed Relatives at Rootstech descend from one of a small number of families:

There are also a couple of interesting trees that I am supposedly descended from but where the information doesn’t quite match my own research as yet:

I definitely have Stephen Summerhill and his wife, Sarah, in my tree as my 7x great-grandparents, but I don’t have Sarah’s maiden name and Summerhill (and variants) seems to be a very common name in the Gloucestershire area, with Stephen being a popular choice of name in those families, making it difficult to unpick. I have found it important to bear in mind that “Relatives at Rootstech” is not the same as DNA matches on other family tree sites. The information on the FamilySearch Family Tree may not be accurate and may not be reliable without corroborating evidence. Nonetheless, these potential links may be worthwhile avenues of research so are worth checking out.

It’s no coincidence that all of these families had descendants who emigrated, mostly to America. Many of the descendants also became Mormons (members of the Church of Jesus Christ of Latter-day Saints (LDS)). Given that church members are encouraged to trace their ancestors and baptise them into the Mormon faith, and with RootsTech being hosted by FamilySearch, the church’s genealogy arm, it’s not surprising that most of my links seem to be via some of the church members.

One link in particular is intriguing as it is via a Mormon Pioneer – Henry Gale (1818-1891) who emigrated from England to Australia, was converted to the Mormon faith, and then left Australia in 1857 for the USA as part of the first group of Saints to leave Australia for America. I have more research to do on this branch of the family, so will add a blog post in due course.

A Yeadon gravestone
66 per cent Staffordshire!