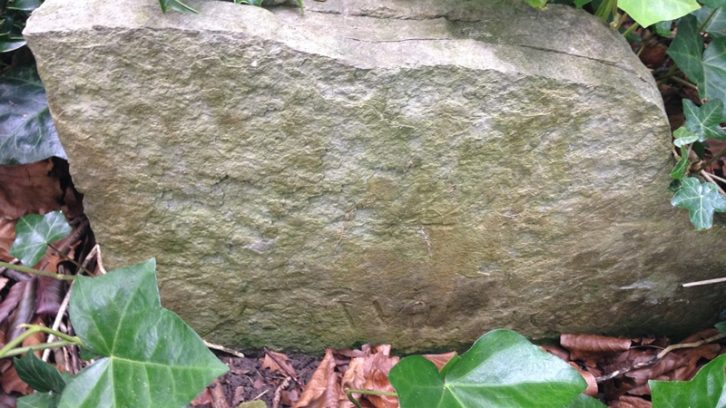 Finding myself in Oldswinford, Stourbridge, recently, I took the opportunity of having a look around St Mary’s Church, which I know has connections with my Yeadon/Haden ancestors. Luckily, I had already downloaded a copy of the Oldswinford parish registers and Monumental Inscriptions (MIs), published by the Birmingham & Midland Society for Genealogy and Heraldry (BMSGH) without which there is no way I would have found the Yeadon gravestone, above.

Even with the details and the sketch map from the MIs, it was tricky to locate the gravestone, as it was hidden under thick undergrowth.

When the MIs were transcribed, the gravestone was hardly legible, so all that was transcribed was: “SARAH the wife of WM. VE YEADON of Exon who died June ye… 1744   SCO…  …. WILLM. YEADON the … died…” Unfortunately, it has deteriorated considerably since then, so that all that is now visible is “Willm. Yeadon”.

By combining it with parish registers, also transcribed by the BMSGH, it seems that it is the gravestone of Sarah Yeadon, who was buried on 27th June 1744. It looks as if her husband, William, was buried on 24th September 1746.

The “Exon” is interesting, as this seems to be a reference to Exeter, although it doesn’t appear to be a name that comes up when searching any of the Devon parish registers on Find My Past.  An old mailing list post from 1996 gives Sarah’s age as 62, although I don’t know the evidence for this.

Certainly, this isn’t, as I first thought, the gravestone of my 5x great grandparents, William and Sarah Yeadon, who are believed to have arrived in Old Swinford from London between 1742-1743. They had eight children baptised at St Mary’s between 1743-1760. ‘My’ William Yeadon appears to have been buried at Old Swinford on 6th February 1768, whilst his widow, Sarah, looks to have been buried on 18th June 1770.

If anyone has any ideas about William and Sarah Yeadon from Exeter, who appear to have ended their lives in Oldswinford, please let me know.