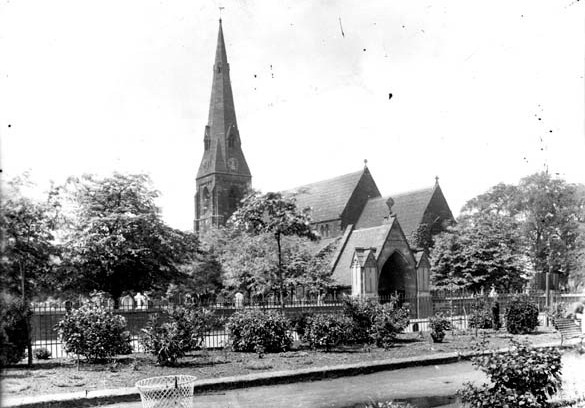 It proved something of a challenge to trace back from my 2x great-grandfather James HADEN. Known information was that he was born about 1832 in Old Swinford, Staffordshire/Worcestershire and that he had an older sister, Mary, born about 1817. Mary married Henry Haywood.

James was living with the Haywoods in 1851 and he had married by 1858, when his first child was born. His wife, listed on census records as Mary, was born about 1836 in Nottinghamshire.

It should be simple to trace James’s marriage. Birth certificates for two of his children give their mother’s maiden name as Henstock/Hanstock. However, there appears to be no marriage of a Mary HENSTOCK and James HADEN (or variations) on either FreeBMD or Find My Past. Nor is there an entry in the Heath Town parish registers with these names.

I have found a Mary HENSTOCK on the 1851 census, aged 14, and living in Springfields, Wolverhampton, as a servant to John and Jane Beddow. Her birthplace is given as Nottingham so this would appear to be the correct person but the marriage with James HADEN seemed elusive.

There is a marriage in the local parish registers that looks as if it would fit, apart from the bride’s name being recorded as Harriet Mary GELL (no father listed, although it appears that the vicar began to write the name “Abraham” before crossing it out). She is recorded as a spinster, which rules out a widow remarrying. I can’t find a Harriet Mary Gell on any previous census returns, nor can I find further evidence of James and Harriet together so it was all something of a puzzle.

I first made a bit more progress on this line by pursuing his sister Mary’s marriage. She is recorded in the GRO index marrying Henry Heywood in 1840 but her surname is recorded as YEADON rather than HADEN. This isn’t a variation I’d thought of checking before.

A copy of the marriage certificate gives her father as Edward YEADON, labourer. This enabled me to find the Yeadon family on the 1841 census and I have found baptisms and marriages on FamilySearch that seems to fit. It looks as if James was descended from William YEADON, a clockmaker who is first recorded in Stourbridge (Old Swinford) in 1743. One of his clocks is featured on an antique collector’s website. The author mentions having found an apprenticeship record for William Yeadon in London and speculates that William may have come from Yorkshire where the Yeadon name is common.

I still struggled to find James’s marriage to Mary HENSTOCK though. I kept being drawn to the marriage of James HADEN and Harriet Mary GELL at Holy Trinity, Heath Town, Staffordshire on 10th August 1857 but couldn’t explain the discrepancy in the bride’s name. The breakthrough came thanks to information from fellow Haden researcher, Jacky.

Jacky found that Harriet Mary GELL was baptised in 1836 to her single mother, Elizabeth, and that Elizabeth married Abraham HENSTOCK a few months later. She was subsequently recorded on census returns under the name Henstock but married under the name by which she had been baptised (Gell). It therefore seems conclusive that Mary HENSTOCK and Harriet Mary GELL are one and the same! Further evidence for this is that the newly-digitised birth indexes, available via gro.gov.uk and which include maiden names of mothers, gives the maiden name of GELL for the birth of James and Mary’s first child, Elizabeth, born in 1858.

DNA evidence seems to confirm that Abraham Henstock was the birth father of Harriet Mary Gell.

WDYTYA Live!
It's all in a name!