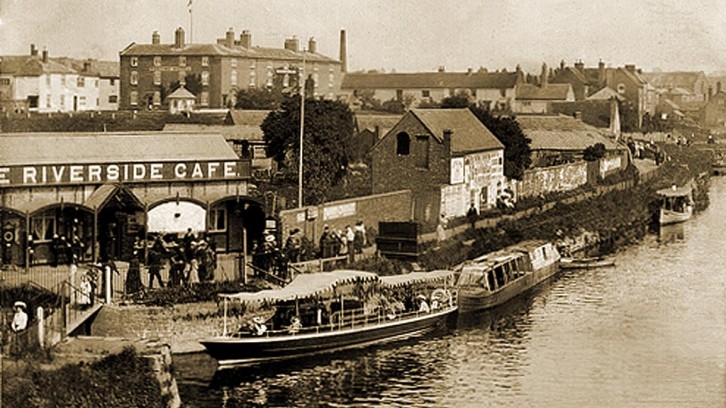 John BALDWIN was born c.1812 in Lower Mitton (Stourport), Worcestershire, and was the son of Thomas and Sarah Baldwin. He wasn’t baptised until the age of 6 (the baptism took place as Stourport Wesleyan Methodist Church). I haven’t been able to find out much about Thomas and Sarah, other than Thomas was born around 1779 and died in Stourport in 1849. Sarah, whose maiden name is unknown, died on 8th July 1839, aged 60. They are known to have had six children, born between 1803-1819 – the five youngest all being baptised at Stourport Wesleyan Methodist Church.

John Baldwin became a boat builder and a Methodist lay preacher. On 8th September 1834 he married Mary JONES from Yarpole, Herefordshire, at St Leonard’s Church, Ribbesford. There’s a likely baptism of Mary on FamilySearch, which gives her parents as James and Jane JONES and her baptism date as 10th March 1811.

The family moved to Greets Green in Staffordshire sometime between 1837 and 1840, and he lived next door to James Baldwin (c.1803-1872), also a boat builder. It appears that John & James were brothers, although so far I haven’t yet found a baptism for James. A newspaper advertisement from February 1843 includes the sale by auction of  “dwelling house, workshops, outbuildings, timber yard, and wharf, Greets Green, Swan Village, late in the occupation of Edw. Davis but now of Messrs John Jones and Baldwin,” so it could be that this sale prompted the brothers to return to Worcestershire. Certainly, John had returned to Lower Mitton (Stourport) by about 1850 – J Baldwin, Stourport is listed as a boat builder in the 1850 Post Office directory, and in directories of 1872 and 1878, which list him also as a grocer in the High Street.

Local newspapers indicate that John was declared insolvent in December 1861, at which time he was living in lodgings in New Street, Stourport (the house of his brother, James) and carrying on his boat building business in the Lower Dock, Stourport. It is possible that John’s insolvency may be linked to the decline in Stourport’s canal trade, which was significantly affected by the opening of the Birmingham to Gloucester Railway in 1840. He doesn’t appear in the 1864 or 1868 trade directories but then later entries show he had diversified into the grocery business.

Mary seems to have died in 1867 and John married his second wife, Fanny MOLE (formerly VINALL) on 31st December 1869 in Brompton, Middlesex. Fanny was a widow, and was 19 years younger than John with a daughter, Fanny Jane MOLE (born 1867), by her first husband, William MOLE. John and Fanny’s first child, Ada Mary BALDWIN, was born on 9th March 1871 and their second child, John BALDWIN, was born in 1874. Fanny’s occupation on the 1871 census is given as grocer and, in the 1876 Post Office directory of Worcestershire, John Baldwin, High Street, Stourport is listed as: grocer, china & glass dealer and boat builder. John died in Stourport in 1889 but it seems that Fanny carried on as a shopkeeper and is listed as such in the 1892 Kelly’s directory of Worcestershire. Her death, aged 60, is registered January-March 1893.

I still have some work to do on this family – I had thought that there might be a link with the family of Stanley Baldwin, Prime Minister and relative of the owners of E P & W Baldwin ironworks at Wilden, where several of John’s in-laws worked. Some of the grandchildren of John’s daughter, Sarah Baldwin, who married Isaac Williams were given the middle name ‘Baldwin’. I thought this was probably to preserve some potential link with Sarah’s family. However, the story in the family is that this is because their godmother was a Miss Clark, who had been a nanny to Stanley Baldwin and only agreed to be a godmother to the children if they were given the name Baldwin as a middle name. This story was told to me c.1995 by Ernest Williams (1911-2005), the son of John Baldwin Williams (1887-1963). As first cousins Alice Baldwin Williams and John Baldwin Williams were both baptised on the same day in the same church, it’s certainly possible that they both had the same godmother and that the story about Miss Clark is correct.

Information from Stourport Civic Society is that the boat-building Baldwins are unlikely to be related to the family of Stanley Baldwin. According to the Society, the family of Stanley Baldwin moved to Stourport from the Corvedale area of Shropshire in the 1780s, at which time there were already some unrelated Baldwins established in the town. It seems that ‘my’ John Baldwin was part of this earlier Stourport family.