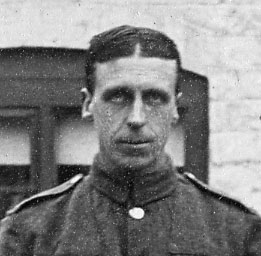 Charlie was a regular soldier who served in the Coldstream Guards during the Boer War, and then joined the South Staffordshire Regiment when the First World War broke out.

The release of World War I pension records has been really helpful in terms of understanding how my great-great uncle, Charles Corns, came to serve in the First World War when aged over 35.

The pension records clearly show him joining the 1st Battalion Coldstream Guards in 1898 at the age of 19 years and 11 months. His previous occupation is given as railway porter. He also declares that he is serving in the militia – 3rd Battalion, South Staffordshire Regiment. He joined the militia in April 1896, at the age of 18 years. At this time he gave his address as Botterham, Wombourne, and his occupation as a canal boatmen.

He signed up to the Coldstream Guards for 7 years, undertaking to serve in the First Class of the Army Reserves for a further 5 years.

He joined the Coldstream Guards in London on 22nd April 1898, being stationed at the regiment’s base in Aldershot until March 1899. His military history sheet shows that he was later stationed in Gibraltar from 10th March 1899 until 27th October 1899 and then mobilised to South Africa to see service in the Boer War from 28th October 1899 until 4th October 1902. The Coldstream Guards website notes that by November 1899 both the 1st and 2nd Battalions were encamped near the Orange River Station and played a very distinguished role in the campaign that later followed.

Charles Corns was appointed Lance Corporal on 25th March 1899 and promoted to Corporal on 25th April 1902. However, on 14th July 1902 he was convicted of drunkeness and leaving his guard whilst on active service. He was imprisoned for 56 days and returned to duty as a Private on 8th September 1903. He continued to serve with the Colours until the expiration of his army service on 18th April 1905, then spending 5 years in the Reserves. He was discharged from the Reserves on 17th April 1910.

The picture shows Charles Corns at his nephew’s wedding in January 1917, a year before Charles died and when he had been blinded in his right eye.

On 11th August 1914, Charles Corns re-enlisted into the Army, joining 3rd Battalion South Staffordshire Regiment at Lichfield on the following day. He was posted to the Mediterranean Expeditionary Force on 2nd July 1915.

On 28th July 1915 at Achi Baba, Gallipoli, he was wounded in the left side of his neck and in his right eye by a ricochet bullet and was admitted to the Red Cross Hospital, Giza, Cairo on 5th August 1915. He set sail for England from Port Said on 23rd August 1915 on the hospital ship Massilia and was discharged on 10th July 1916 as being no longer physically fit for war service. A medical board report dated 22nd June 1916 says that he is blind in the right eye and is also complaining of trouble in his sound left eye, which is watering and smarts at times and the sight is growing weaker. The report also comments that he has had a great deal of rheumatism lately. At the time of discharge, he is listed as being in the 7th Battalion (depot) and his trade is given as ironworker.

In March 1917, he requested an increase in his pension and was examined at home by a Medical Officer, who recommended that he be admitted to hospital in Birmingham for further examination and observation, commenting “His disease may have been caused by exposure while on active service, and certainly would be aggravated by it” and suggesting that “he be considered totally incapacitated at present”. A note in April 1917 indicates that the question of an award being made retrospective “should be left until more is known about his condition. At present, the cause and nature of the disease are doubtful”. An interim award was made in June, expiring on 30th October. A medical board on 31st October 1917 reports “He is a cripple and unable to get about, if he were otherwise healthy, – the disability, one, to the eye only, would be in my opinion 50%”.

Charles Corns died on 15th January 1918, aged 40, and he is buried in the churchyard at St John’s, Swindon, Staffordshire. His death certificate says that he is of no occupation but was formerly a coal wheeler at the ironworks. It gives his cause of death as “general paralysis and pneumonia”. Although included on the memorial window in his village church, he wasn’t accepted as a war casualty by the Commonwealth War Graves Commission until 2010, presumably because the medical board felt his disability was only partly due to his war service.

However, the inclusion of his name on the memorial window at St John’s Church, Swindon, Staffordshire indicates that, as far as the local community was concerned, his death was a result of the injuries received on active service. As a result of the efforts of the churchwarden at St John’s church, the Commonwealth War Graves Commission has accepted him as a war casualty and inserted his details onto their Debt of Honour Register, erecting a gravestone in the churchyard in the summer of 2010.